Sometimes, we like to visit a peranankan restaurant to taste the strong spices of our regional food. There are many restaurants in Singapore that may boast about authentic peranankan food, but not many have the history of the restaurant we visited today.

Guan Hoe Soon restaurant has been around since 1953 and is always around the Joo Chiat area, so for those of you who go there with private transport, its extremely difficult to find a parking lot near any restaurant for both motorcycles and cars!

When we stepped into the restaurant, it has this down to earth kinda feeling. The decorations on the wall had ceramic art plates with peranankan designs. They also had those old school wooden chairs which were common in the old kopitiams, comfy ergonomic design for me. 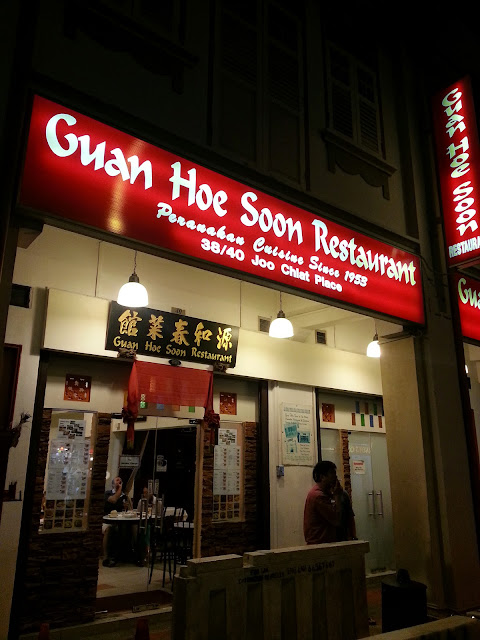 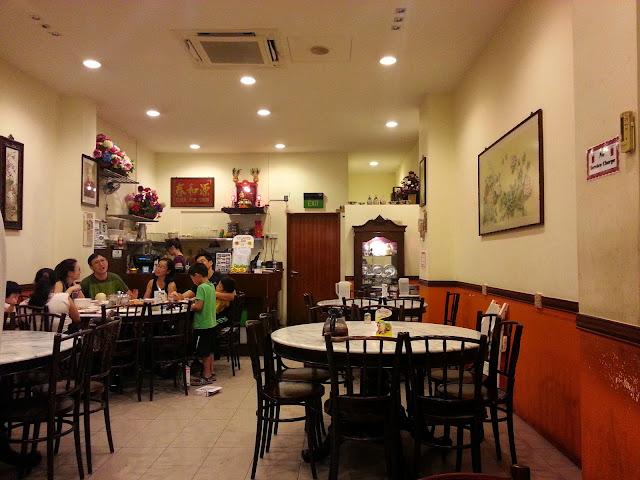 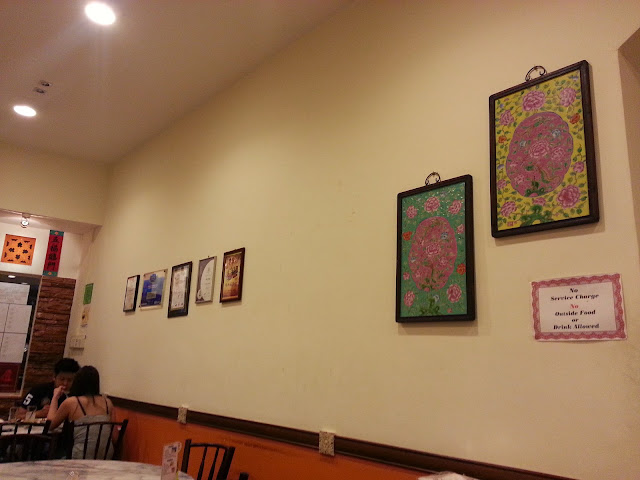 We were quickly ushered to an empty table by the anxious staff who seemed stressed and overwhelmed by the dinner orders.

After a quick glance at the menu (they had menus on the windows as well, so you could see them before entering), we ordered the following: 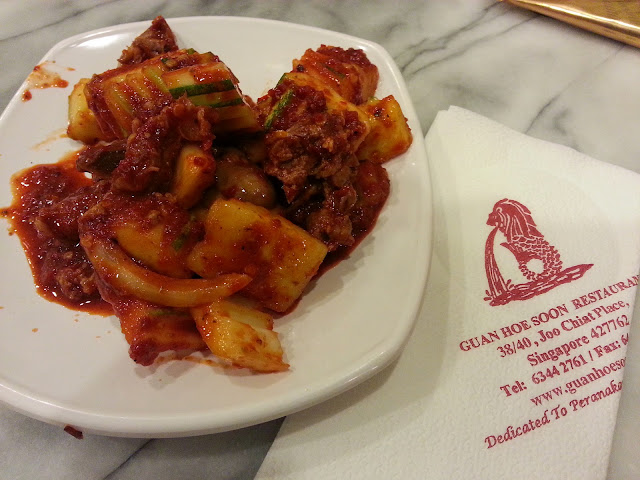 As usual, the restaurants in Singapore will "forcefully" give customers a plate of "pickles" without informing them this dish is chargeable. We are ok with this "appetiser" dish at $4, but we like the koreans better where they shove us multiple appetising dishes without additional charges (except Auntie Kim's @ Thomsom!). Its time the local restaurants learn from other asians. Anyway, this is a spicy cucumber dish. I find the spicy slightly overwhelming and probably unnecessary. 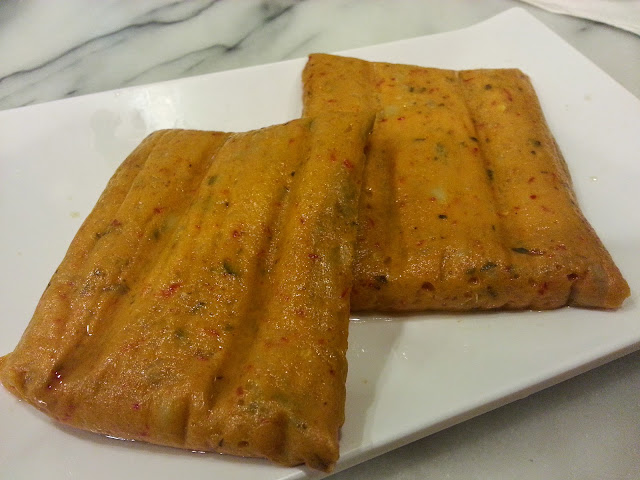 Otak Otak @ $16. This otah is really sedap and it has many fish bits in there as well. I don't find the spiciness overwhelming at all and its pretty juicy. I would rate this 4/5. 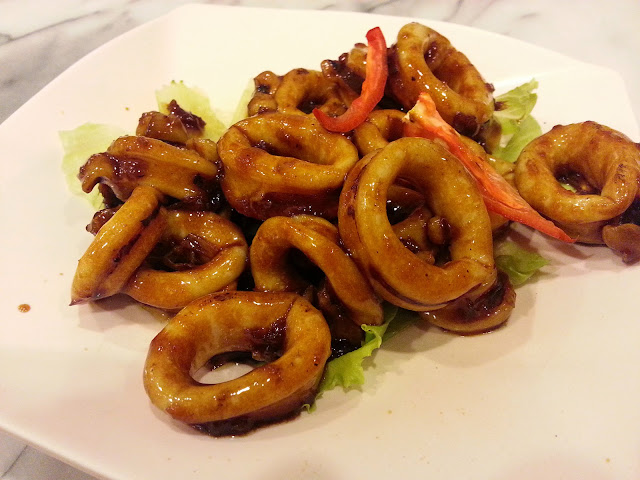 Sotong Ayam Goreng @ $12. This was done up pretty well because the squids were springy and the sauce was balanced well. This was not spicy at all and is suitable for those who eat seafood. This should be a 4/5. 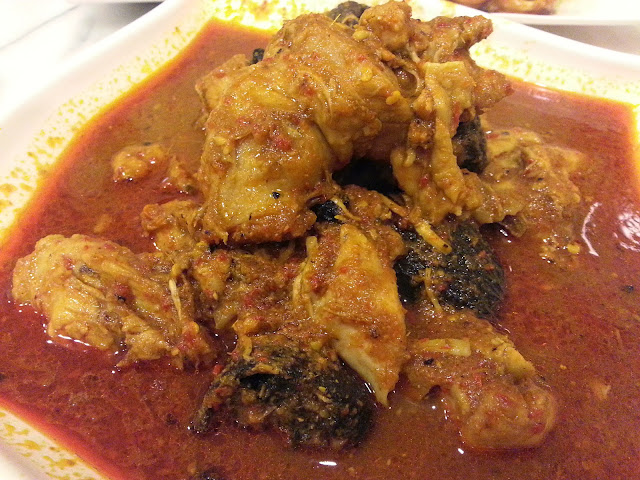 Ayam Buah Keluak @ $20. One of the favourite all time peranankan dish? You can find this in ANY peranankan restaurant around the region. Of all the ayam (chicken) dishes I've tasted, this is actually pretty good. And of all the Ayam Buah Keluak dishes I've tried, this is among the best. This $20 dish can feed the 4 of us there among the dishes we had, and still have some more left. Some peranankan restaurant portion is actually pathetic because of the quality spice and herbs used I think.

The ayam is tender and juicy. The spiciness for me is acceptable with all the herbs and spices used, can taste spice a bit, sweet a bit, sour little bit, salty little bit, and the buah keluak (see below pic). 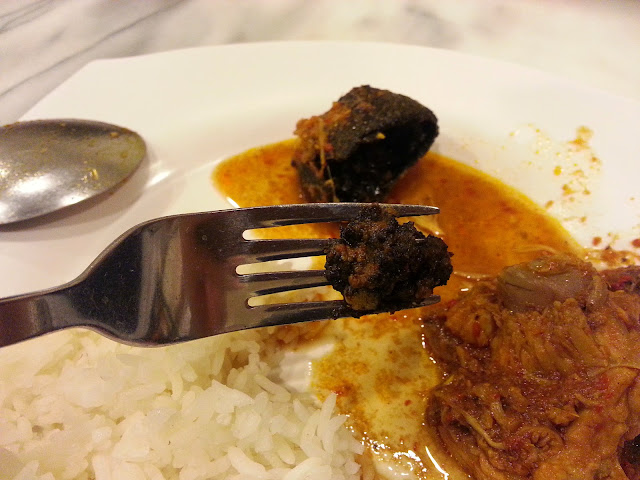 There. This is inside the buah keluak. I should have increase the exposure +1 or +2 to lighten it up. I hope you can see it from the angle on your device. How does it taste? Hmm... urm... its not yucky if you asked me. It has this faint herb taste, hence it doesn't overwhelm yet compliment the dish very well in the overall. I guessed that's the reason why there are seemingly a fair bit of buah keluak in the dish. 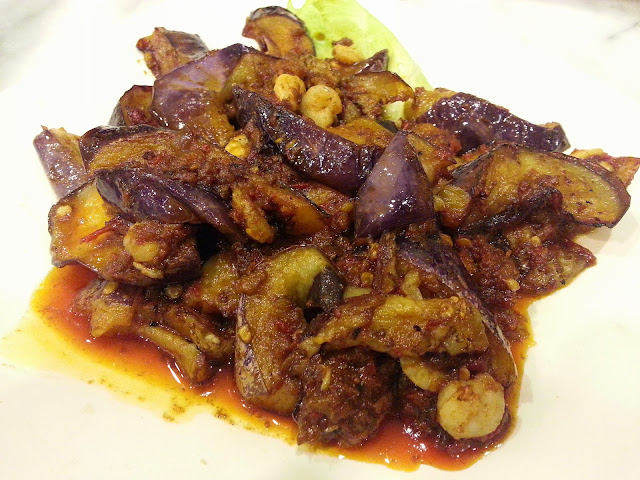 I like egg plants and I find it quite difficult to cook them myself. The plant itself is juicy but bland when cooked. So to bring out the taste, ingredients of strong taste must be used. This restaurant had whipped up this dish pretty well I must say. However, for those of you who don't like overwhelming spiciness, I would say you might like to skip this one as well. I had a few pieces and could feel the heat.

The small shrimps and fragrant oil used in this dish perhaps made it a well liked dish. I would say a 3/5 from me. 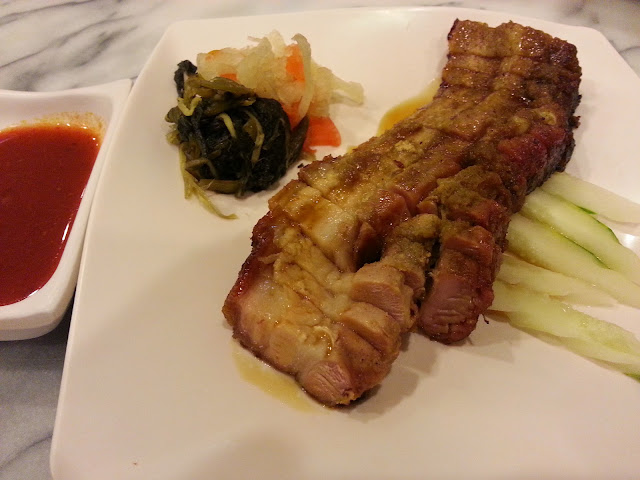 This one is off the charts but my mobile phone picture wasn't taken nicely though. A bit of light would be better. Lets talk about taste. Babi is pork, and pangang is roast, hence Roast Pork. Thank you for attending the lesson, that'll be $5 please.

This dish isn't in the menu and we were told the chef was trying this out. So, we were guinea pigs literally, and willing ones! The texture of this meat is tender and not chewy, where it could be easily consumed. Its not like those salty roast pork we usually have at those roast meat stalls. It actually taste pretty much like char siew. So I have a wonderful time with this dish, seemingly its 1 meat but has more than 1 interpretation. 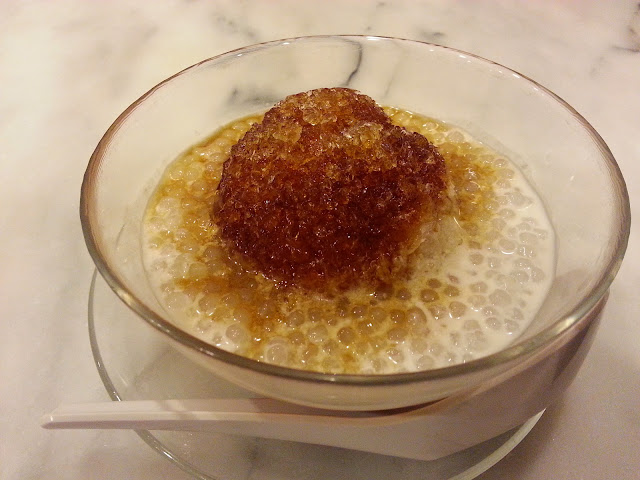 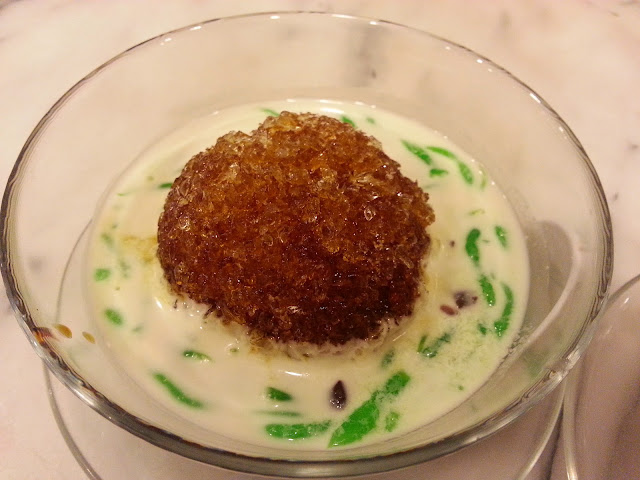 Chen Dool is an all time favourite dessert you can find in almost any part of South East Asia. You can have the spelling from Chendol, Chendul, or in this restaurant Chen Dool. For my Caucasian friends, its pronounced as Chen Dough.

I don't like the artificial green jelly that Guan Hoe Soon has here. There are more authentic green jelly made in Malaysia. This dessert here generally is good. So for this I will give it a 3/5. 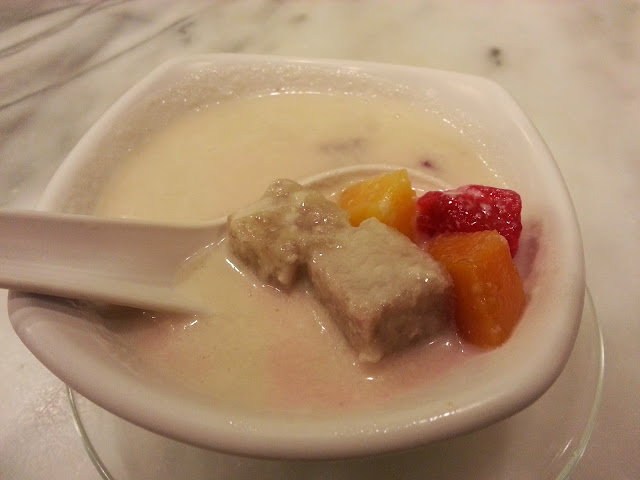 I ordered this dessert because I want to have a warm dessert. Guan Hoe Soon serves this either cold or hot. So thats good for the customer. Overall, this dessert is EXTREMELY sweet! I think my south asian friends from India will love it.

Bo Bo Cha Cha is a sweet coconut dessert with yams and sweet potatoes usually. The reddish thing you see there is a red ruby! No its not rock, and yes its a treasure not to be found in most Bo Bo Cha Cha! Red ruby is a handmade chestnut ingredient found in several South East Asia dessert, including the famous thai red ruby dessert.

The texture of this dessert is very smooth and creamy. The yams and potatoes are soft as well which can be consumed by anyone in the family.

Activities that bee did